I have been using the Samsung Galaxy S10 Smart Phone for a little over a year now. It’s a great phone. Full of power and speed.

The Samsung Galaxy S10 has a not too small and not a giant display size of 6.1”. The display is share and clear. It’s fast and stable processer gets me from app to app or website to website in no time. Therefore, even if you forget to close previously opened apps even entry level Galaxy S10 has more than enough RAM to keep the phone running smoothly.

Samsung Galaxy S10’s battery is long lasting. Sometimes I don’t have to charge the phone for a day or two.

With such a featured fill phone a few comments about the S10’s camera are due. As you can imagine with such a bright and well pixelated display photos and videos are a pleasure to view. That includes the ones you take and the ones that others share with you. To be honest there are so many features and option available on the S10’s camera app I personally only find myself using three. Taking photos and videos, and using the ‘selfie’ feature. For my use I need Androids onboard zoom magnifier to navigate from mode to mode on the camera app. While there are a number of modes one’s fingers might stumble upon by mistake the photo and video modes sit right next to each other making things a little easier for the user. 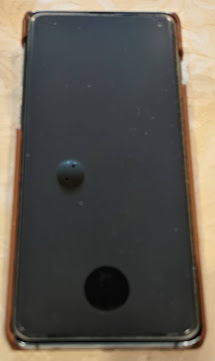 Like mangy Smart Phones the Samsung Galaxy S10 offers more than just a camera with its camara app. With different apps the camera can be used for many purposes, such as a magnifying glass, bar code reader among many more task with appropriate apps. I personally experiment with the devices Augmented Reality apps as I am optimist AR technology will soon be used to improve the vision of visually impaired people.

A major concern I came across after setting up the Galaxy S10 and proceeding to enable Android’s Zoom magnifier (an app I need to read connect on screen and found very effective on my previous Samsung Spart Phone Galaxy A7 International) As soon as I opened the on-screen Samsung keyboard the Samsung keyboard expanded taking over the screen and froze. After shutting down and restarting the device several times this issue persisted. I ended up returning my Galaxy S10 and exchanging for the same model. The Samsung keyboard continued to malfunction. A Samsung specialist suggested I download Google’s on-screen keyboard, gboard. This option works and I have not had any trouble or had to make any chances since.

A further strange and disappointing issue I encountered with the S10 involves a messaging app I regularly use, WhatsApp. With low vision and hearing anything that would attract my attention to in-coming messages is useful. My old Samsung phone Galaxy A7 along with the S10 offer the standard vibrations and ring towns as notification. WhatsApp also offered a helpful additional ‘pup-up’ notifications of which a small notification box would pop up on the screen and stay there until I noticed and acted on the notification. Galaxy S10 does not support this feather even at its most updated OS Android 11 in February 2021.

The Samsung Galaxy S10 Spart Phone is an excellent phone features all the latest technology of its time Thus making the S10 as stunningly fast as it is stunning to view. At the same time having all of Android’s Accessibility apps available to the use.